I was born in Sarajevo (Bosnia and Herzegovina, formerly Yugoslavia). Most people know little about this city except that it hosted the 1984 Winter Olympics and withstood a devastating war from 1992-95.

However, it is my duty to mention that Sarajevo is known for some interesting chess facts: 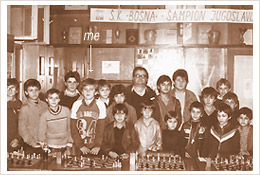 Back in the '80s , chess was popular among kids. We had no choice; video games and the Internet didn't exist at that time. My apartment was very close to the chess club "Bosnia" where I spent most of my youth playing with my friends. The club organized many tournaments for kids so that it didn't take too long to get hooked. I guess it was around that time that I became fascinated with the game, and that fascination is still with me today.

I immigrated to Toronto in January 1999. Considering the fact that I fled the war, and was living for six years as a refugee in Germany, in Toronto I started to feel free and be able to plan my future.

I am married to a fantastic Portuguese woman named Sofia. We have two sons Mateo, born in 2005, and Marco, born in 2007. One of them will certainly be the next World Champion. Why? Well, because they'll have the best chess teacher in the world!

I play chess whenever I get enough spare time. I often play in Toronto tournaments, and online at playchess.com or ICC. My current FIDE rating is 2214, and my current CFC rating is 2255. I am a chess teacher, currently giving private lessons, and as part of the Chess 'n Math Association team.

As far as my other interests go, I am a web designer and own a web design company in Toronto.

I also like to learn new languages. Living in different parts of the world and meeting different people gave me that opportunity. I speak four languages fluently, Serbo-Croatian (my mother tongue), English, German, and Italian. I can understand some Portuguese, but honestly, it is solely based on daily conversations between Sofia and the kids. Let's just say this: I can have a decent conversation with a Portuguese toddler :-)